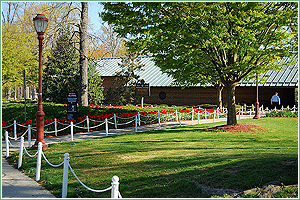 To view this gallery, simply click any image. Hover over the larger image for "next" or "previous" buttons, or use your arrow keys.

In 1937, the Smyrna Rest Area was little more than a picnic table and a wide spot in the road. It was one of many such spots opened by the Delaware Highway Commission.

Since then, the rest area has grown not only in size, but more importantly, in it's place in Delaware culture. Today, the facility has two to three million visitors a year, and even hosts weddings and countless picnics.

According the Rest Area Supervisor Ron Szyskowski, the rest area has become a Delaware attraction all on its own. "Local people like to come here and have picnics, and just sit in the Memorial Garden. On a nice day on a weekend, there are picnics all over here," he said.

Over the years, the rest area has had many facelifts and re-births. From its meager early days, it has been re-named a couple of times, and has seen a number of buildings spring up on its grounds.

At one time, the rest area had a petting zoo, where local farmers would drop off sheep, calves and other livestock. While it was great for the kids of travelers, it proved difficult and expensive to care for a menagerie of animals.

The existing building was opened November 18, 1991. It has bathrooms that are touch free, which means that the toilets flush automatically and the water faucets are turned on by motion sensors. In addition to the restrooms, the rest area has a large visitor information center and a meeting room. Outside, there is a large picnic area, a pavilion, and the new Memorial Garden.

The Delaware Memorial Garden is a winding path lined with bricks that are engraved with names of those who died on the state's highways. Szyskowski said the Memorial Garden has become very popular. "All the time I see people sitting out by the pond, just quietly reflecting. It's a nice spot."